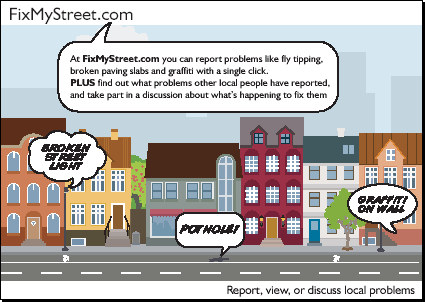 FixMyStreet is a web-based application, launched in February 2007, which enables citizens to report local problems. The problem reporting is facilitated with the use of Ordnance Survey maps which are used as a backdrop for users to spot the exact location of the problem. The issues reported by the users are propagated to the relevant councils by email. Users reporting a problem are contacted by FixMyStreet after four weeks so to record if the issue has been resolved. Local problems can include a variety of issues such as abandoned vehicles, dog fouling, fly posting, graffiti, fly tipping, unlit lampposts, potholes, litter and street cleaning. However, there is a clear message from the website’s administrators that users should contact directly their councils for more urgent problems or issues regarding anti-social behavior. Moreover, administrators are not holding themselves responsible for the content or the accuracy of the posts and they reserve the right to edit or remove a post that is considered inappropriate. FixMyStreet was built and administered by mySociety, a registered charity, and it is a free to use website. However, there is also the FixMyStreet for Councils application which is a paid version adapted to council needs for handling the problem reports.

FixMyStreet has been one of the most popular web applications that enable citizens to voice their concerns regarding local issues. Through an admittedly simple process, the website has succeeded to engage people to their community and opened a channel for public input into problem solving. In turn, this resulted into shifting the power of local government from the state to the hands of the citizens (King and Brown, 2007). Moreover, citizens’ involvement into local problems has resulted into public value creation both direct (i.e. social gain that has immediate relationship with the user that reports the problem and his/her neighbors) and indirect (i.e. social gain that is dispersed to the entire community). The difference between FixMyStreet and previous mechanism for reporting local problems is in the public aspect of it – instead of the report being recorded on a local authority system, it is done in the open, and other residents can see the issues that were reported and how the local authority deal with them.

However, there are some issues of concern especially when it comes to the data created: the cycle of public data creation, propagation, consumption and diffusion back to the public creates inconsistencies. More specifically, councils themselves have an independent channel for local problem reporting and thus the launch of FixMyStreet created a parallel channel that many times simply duplicates problems already known to the council or, in the worst case, confuses the authorities as the descriptions of the same problem appear slightly different. Additionally, when the council fixes the problem (in its own time, that might take more than four weeks) is not able to report back to the application the progress on the issue. This later case is the driving force behind the initiative for FixMyStreet for Councils; however, this version does not come for free and thus only few councils in UK have adopted it so far.

In a broader sense, this boils down to answering the questions about who should be the curator of the data when there is a mix of crowd-sourced and official datasets and how the duplication of the data can be avoided so to have only one commonly accepted dataset? The line of authority for the two stakeholders (i.e. citizens and public services) has to be clearly drawn and explained so to promote common interests and avoid malfunctions in local governance.

King, S.F. and  Brown, P., 2007. Fix my street or else: using the Internet to voice local public service concerns. In: Proceedings of the 1st international conference on Theory and practice of electronic governance, ICEGOV ’07, p. 72–80.